In March 2014, global health officials recognized an outbreak of Ebola virus disease (EVD) in Guinea, West Africa. In retrospect, officials determined that the outbreak began in December 2013, and spread to the adjacent countries of Liberia and Sierra Leone. In September 2014, the U.S. Centers for Disease Control and Prevention (CDC) confirmed the first EVD case diagnosed in the United States, heightening concerns among some who fear the disease could spread in American communities. This report discusses EVD in general, including symptoms, modes of transmission, incubation period, and treatments; presents projections of the future course of the outbreak; and lists additional CRS products, including products focused on the situation in West Africa. Unless otherwise cited, information in this report is drawn from Ebola information pages of CDC and the World Health Organization (WHO).
Author: Lister, S. A.
For more information please contact:
NTIS 1-800-553-6847 M – F 8am – 5pm est

One of the challenges of designing motors and alternators for use in nuclear powered space missions is accounting for the effects of radiation. Terrestrial reactor power plants use distance and shielding to minimize radiation damage but space missions must economize volume and mass. Past studies have shown that sufficiently high radiation levels can affect the magnetic response of hard and soft magnetic materials. Theoretical models explaining the radiation-induced degradation have been proposed but not verified. This paper reviews the literature and explains the cumulative effects of temperature, magnetic-load, and radiation-level on the magnetic properties of component materials. Magnetic property degradation is very specific to alloy choice and processing history, since magnetic properties are very much entwined with specific chemistry and microstructural features. However, there is basic theoretical as well as supportive experimental evidence that the negative impact to magnetic properties will be minimal if the bulk temperature of the material is less than fifty percent of the Curie temperature, the radiation flux is low, and the demagnetization field is small.
Personal Author: C. L. Bow
For more information contact: NTIS
800-553-6847 M – F 8am – 5pm est 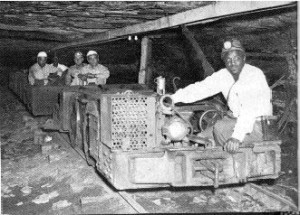